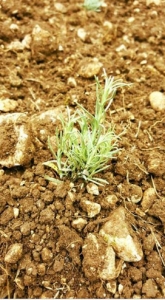 The aromatic herb of Helichrysum has a long history and tradition of use and therefore many names.

This herb comes from the botanical family of Asteraceae and includes over 600 species in the Helichrysum genus occurring in temperate regions throughout the world.

In English it is called Immortelle, Everlast or Helichrysum, in Italian Elicriso, in French Immortelle for the belief that the herb can erase traces of time from the skin.

Famous for its bright yellow flowers in Croatian it is called smilje,smili, cmilje, zlatnocvita trava, zneljek, laska kamilica, marjetica or sneljek and has been a folk medicine for curing gallbladder and the urinary track.

Grown also in South Africa, the Afrikaans common name for Helichrysum is sewejaartjie and derives from two words – “sewe” meaning seven and “jaar” meaning years, signifying that the herb is a long lasting plant.